We haven’t stopped speaking to each other yet.. 3 days in a van with the same people and CBC full blast could potentially do that to some people.. but.. We made it to Uncle Darryl’s place outside of Vernon today, where we’ll stay for the next few days before heading to the resort in Kelowna for the wedding. The past two days have been pretty uneventful, and full of driving. We spent last night at a B&B outside of Cochrane, which had a gorgeous view and great hospitality. Lyle and I went for a bike ride before supper, which first I convinced myself I shouldn’t do, then I decided I might as well, so off we went. I went 10k in the hills surrounding our area, and I haven’t done any sort of hills for at least 3 years, since the last bike trip I did with good ol Lyle Myers, and even then, those hills were only MB hills. However, I handled this short trek really well, beating Uncle Lyle up most of the hills (he trains for triathlons) and still having energy to spare when I got back. Yay for the lower body strengthening I’ve been doing! I wasn’t even sore today. 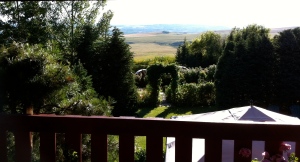 After convincing the hosts to make us breakfast an hour and a half earlier then they normally do (Rance time), we were off in the morning by about 8:30. Driving through the mountains was gorgeous as usual, and I had a fantastic nap most of the way from Golden, after lunch, to Craigalachie where we stopped to stretch our legs and look around at the “last spike” site of the railroad. We got some ice cream and I had some fun in the photo op, which you’ll see below..

Over our borsht supper in Vernon we discussed the violence displayed in girls basketball, especially at the rural high school level. Brought back many memories of going flying across the key after taking a charge, stitches, bruises the size of small countries, broken noses, the dirty plays the refs never saw…or pretended not to, playing full games with no break but the few time outs, throwing elbows when the refs weren’t looking, letting your nails grow out before a play off game against Morris, beating Morris by 1 point numerous times, the adrenaline. Man I miss it. Especially the bruises. Nothing better then sitting around in the change room comparing bruises after a game. And all those times our little team from Carman beat out or came very close to higher ranked teams (Elton in 2010, and those AAA teams this year come to mind) with nothing but pure hard work and determination are memories never to be forgotten. Definitely going to have to find a rec team to play on sometime in the future. Team sports are nothing something I’m ready to be done with. It was nice talking about those days past around the dinner table. 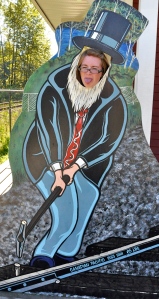 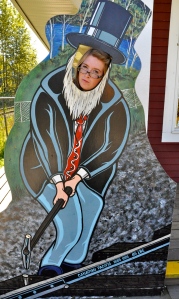 One response to “Vernon, BC”