So I decided earlier this week to stay at Airhill for a few more days. Originally we were leaving for Wellington this past Monday, but due to a lack of funds on my travelling partner’s side of things.. That didn’t happen. As I’m pretty anxious to get travelling as I only have a few weeks left- I’m busing to Wellington on Saturday, and then flying to Christchurch later that night where I’ll visit/rely on family hospitality (again) with Esme Elliot and one of her daughters, Lindy. They sounded very nice on the phone! Next weekend I’ve lined up a job working as a groom for a grand prix rider at a Christchurch show. They needed some last minute help and I’m always in favour of some extra cash. After that I’m not sure what’s happening. I’m supposed to meet back up with Hannah and Niamh whenever they get over to the South but as usual, I’m just going to plan as things happen. I’ve learned that (especially with my luck) there’s not much point planning too much ahead as usually (always) it doesn’t work out to said plan. Going with the flow like a champ over here!
As for work. Still loving it. Well, mostly. I think it’s fantastic to be in the saddle again.. Unfortunately my knee does not. My back is perfectly fine- its loving it actually. However, it got to the point where I didn’t even ride today because of my knee. One of my last good joints! Ah! Probably does not help that I’m riding 3-5 horses per day.. Most of which are very strong race horses.. Not easy rides. Tomorrow is my last day and I’ll have 5 horses needing exercise so I’ll pretend it doesn’t hurt to move my knee (while trotting for 4 hours.. Good luck with that!). By the way, if you’ve ever wondered what it’s like to ride a race horse at full speed… I can tell you now.. It’s flipping terrifying. I guess it’s because I’m not a jockey (clearly, look at me) and I’m very much used to training the run out of horses, not letting them run. Although I have noticed something when I’m riding these horses. As terrifying as the situations are, I never actually feel scared. I mean.. There is a voice inside my head screaming “what the hell are you doing, you should be curled up in a ball whimpering in fear at even the idea of this.. Etc etc” but clearly that voice has been locked deep deep inside by years of riding and training myself to not be nervous or scared when on a new horse or in a difficult situation, because I legit feel nothing and I keep on riding just the same as if I was on a leisurely hack. I could just be insane. A little of both? Most likely.
Anyway that’s basically all that’s new here in this earthquake ridden country. Apparently a lot of the regular grooms that go to the south shows are refusing to go due to the fact that there is at least one earthquake a day there. Leave it to the crazy broke traveller to head right on over!
Oh and a you can see in the picture, my hair is growing fast! Tonight we’re out on the town for a Bob Dylan tribute concert in Napier, and Chinese buffet. I also made cheesecake today.. And have become addicted to toast. There is a reason I don’t bother with diets, food is just too awesome.
I’ll stop writing now as its getting pretty random.
Cheers! 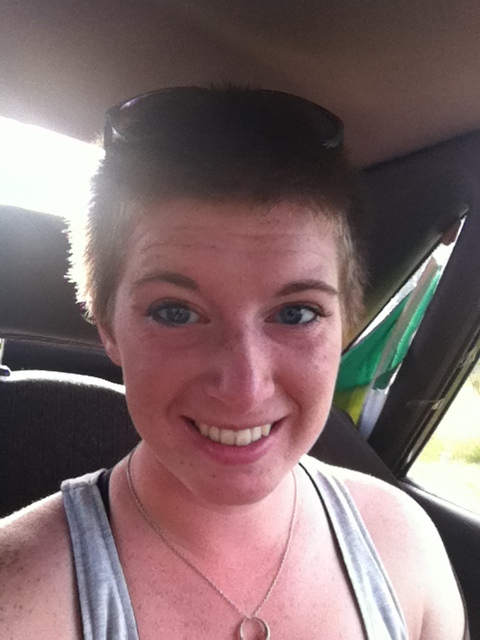