Look at me, posting on a Sunday like I intended to!

I had another one of those weeks where it felt like a month passed in 4 days. And I really don’t think that feeling is going to go away any time soon. The amount of things I’m fitting in right now qualifies me for the hypothetical over-scheduling olympics. Hypothetical only because they won’t ever happen due to scheduling conflicts.

I believe I mentioned the opportunity I received early last week to work alongside three profs and a few other students teaching and assisting in an older adults exercise class and research project on campus this year.  I feel pretty lucky to have been in the right place at the right time with this one, as it will be giving me loads of learning experience (and connections) in exercise prescription and working with a different age group. To go along side this, the AT that works at the gym I also work at has delegated me his Thursday night assistant. Literally 10-minutes after walking in the door for my shift Thursday he had me stretching out a client for him. He taught me a few new stretches that I hadn’t learnt yet and informed me that I would be learning many more over the next week or so as he has a large client list for Thursday nights and needs an extra set of hands doing things like stretching, supervising exercise, and whatever else he deems me able to do. And my hands need the experience. So, there we go. I have a nice contrast going right now, between working with high school athletes, seniors, and now also the in-between aged clients.

To add to this list, I also accepted a volunteer position with Horse Connection . This organization is based around providing inner city/high risk youth with behavioural and now also physical disorders or disabilities a chance to work around horses and learn new skills in a structured and challenging environment.  They combine the benefits of both sport and working with animals to help change lives. How awesome is that? I’ve been a fan of this program for a while, knowing one of the co-founders, and was so happy when she asked if I would be interested in getting involved. My position right now will range from exercising the lesson horses, to basic instructing/supervising the kids around the horses, and handling/leading horses during lessons. It seems like the kind of position that can lead to more opportunities down the road, especially with my educational background.

Am I doing well on the “not overscheduling” goal I listed last post? Ehhhh… not really… Basically gained another 3 jobs, to add to my current part-time job, as well as a full course load- this week alone. Oh and lets not forget football. Here’s hoping the universe is done offering me schedule fillers, because we all know I have a serious problem with saying no to things. But, I am doing better with my nutrition goals, and I did open a text book yesterday and read a few pages. Win some you lose some, I guess.

What else can I tell you?

Friday was our first season game in Brandon, and my first ever football game. Like I’ve mentioned before, it’s been a steep learning curve and a new perspective for me. As an athlete myself I’m not unfamiliar with the practice/game/team-sport atmosphere- but it is very different point of view as an AT student. As much as you are a part of the team, the AT is responsible for all things regarding player safety and because of this has to stay very objective in every situation. As much as you are involved, you are the one responsible for taking a step back and often making important decisions when it comes to an athletes’ well being.

We travelled to Brandon (thankfully on a coach bus, not a school bus like my high school athlete days). I had no idea what to expect going into the game, as I’ve only ever been to one football game in my life as a spectator- and never as a member of the team. True to my theme, Iearned fast on the go. On the bus my supervisor gave me the job of talking to all the athletes to find out what they needed, wanted, or felt they needed taped before the game. Her words upon handing me the pen and paper were “are you okay doing this?” and my response was “I’m going to be”. This basically sums up our working relationship. She hands me something out of my comfort zone, and I figure out how to handle it in a hurry. It’s comforting to know that she wouldn’t ever give me something out of my depth, but it doesn’t change the terrifying leap I end up taking out of my comfort zone. Great for learning.

So after roaming through a moving bus filled with football players, and arriving in Brandon, I set out on taping ankles and other pre-game tasks. Once the players were ready to go, we headed out on field and I was handed another unfamiliar task. Filling out the emergency action plan for the game location. This I was guided through, and it really isn’t too hard- just involves talking to the other teams trainer, finding out their qualifications (if any), and knowing the address and ambulance entrance directions in case of an emergency. Once that was done, and the game had started, I did a lot of observing. Thankfully there were no major injuries- the head trainer only had to go on field once for a bad case of bruised ribs. I watched a few assessments (bruised ribs, shoulder subluxation, wrist injury), and dealt with a few minor cuts and wardrobe malfunctions. Then the game was over, players showered, and we were back on the bus home. And I started breathing again.

Saturday brought a nice relaxing (what?!) day spent hacking with Lauren at the barn (got to hop on the by far biggest horse in the barn, Shakka), and then lounging around running errands the rest of the day. Sunday brought my first ever 10k run in the Winnipeg 10&10 for Winnipeg Harvest. When I say my first ever 10k, I mean it. I haven’t ever trained over 10k before. How’s that for spontaneous. I’m very proud to say I managed to finish in 1:01 hrs, a very respectable time for my circumstances/irresponsibility and ran the ENTIRE thing. 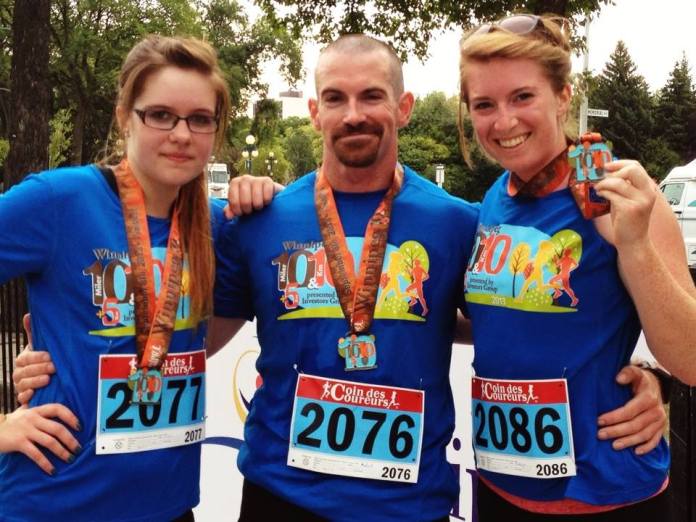 That was week 1 of my the last 25% of my University degree. It is still so weird for me to be a third year. There are many moments when I feel like the jaded student that I am, but equally as many moments where I feel like I’m still a newbie. I guess that’s because this is the first year where all my classes are specific to my career choice, and much more challenging. Somedays it’s easy to imagine working in the real world, because I have already gained some experience actually doing it- and will gain much more by the time I’m done this year (or this semester even). All the things I’ve been planning for my future are actually starting to happen. Old goals and new goals are becoming even more clear. It seems like such a short time ago I was still unsure about where I was going or who I wanted to be, and yet I’m finding myself becoming more experienced in things I used to only dream about more and more each day.. especially when I fill the days up like I do. Time is flying, even when it feels like it’s dragging.

To end off, I’ll leave you with some pictures of the meals I’ve made to get me back on track with some good eating to keep me going and over scheduling (haha, I wish I was kidding), and some other random snapshots from the week.