Stealing from my Uni blog again…

Don’t worry, another post is coming yet too. But I already had this one written so I figured I’d post it to give you something to read in the meantime. Some of it maybe a repeat, some of it may not be.

It seems like longer than a week ago that football wrapped up for the season. But, I guess it is that time of year when time seems to double its pace.

Our final game went by with no new injuries. Seriously. Nada. The game itself was pretty anticlimactic, after the Clansmen battled their way through play offs to make this final game, they seemed to run out of gas and basically handed the opposing team the championship. It was too bad they didn’t play up to their ability, but it was still pretty awesome to be on the sidelines in the IG Stadium. I remembered my hand warmers, but they were hardly necessary as there were heaters field side which thawed numb fingers in 10 seconds flat. It was a challenge to get the prime spot directly in front of the heat between the players milling around the area as well, but it was a luxury to have hot air anywhere close to where I was standing! 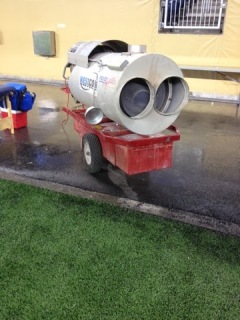 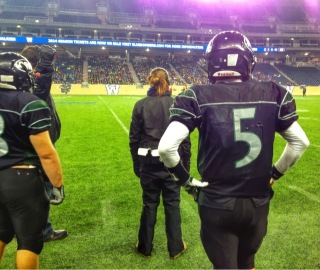 Besides the heaters, the most exciting thing for me about the final game was having a player that I taped pre-game be in awe of my heel-locks (lame– and yes, I am still incorporating heel-locks into my posts. Deal with it.), exclaiming “Wow! That was so fluid and cool looking! Is that hard to do??”.  Maybe one of you paid him to say that so I’d shut up about the darn heel locks already, maybe I’ve actually improved this season. Either way, it was nice to hear! The second cool thing about this game was how the players were afterwards. Yes, they were disappointed and a little down after their loss and the season ending- but more then a few of them made a point of coming up to Nikki and I after the game and thanking us for the season. 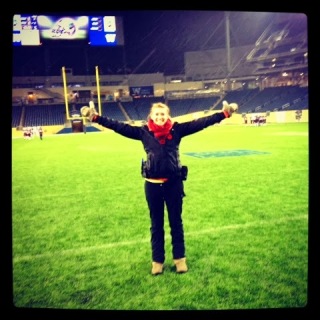 So, what did I learn through my first football season?

And many, many more gems of knowledge. I’ve been asked many times by friends and family if I’ll work in football again, and the answer is always yes. It used to be a sport I was kind of terrified of, and knew nothing about (still on that list is hockey, wrestling, rugby, water polo, and judo)- but now I can add it to the list of things I sort of understand and like.

In other AT news, I somehow found myself giving my 85-year-old grandfather a deep tissue calf massage after he charlie horsed it curling on Friday (**crosses that off bucket list**) I have to say, he complains a lot less then the clients I work with at work with Claude.. Where most people would be expressing many different phrases out of discomfort, he was giggling and saying “yep, you found it.. that’s the spot!”. After working on it for him, he found that he could walk with much less of a limp. I gave him a few stretches and strapped ice on it for him before leaving (and giving him, and grandma, instructions for ice and the next few days etc). He showed up at my door the next morning, telling me how much better it felt and that he went for a walk that morning and could walk “almost like brand new”. Grandma, of course, wasn’t happy, because he hadn’t done his stretches yet that day- and clearly wasn’t following my instructions by the book. You win some you lose some. It was nice to be able to help a family member, even with something as minor as a charlie horse, and see them happy with the results.

I do have some goals for the coming weeks, and I’m sure many of you other students have similar ones: Practice/study the heck out of assessment, first responder, and taping. I’ve started keeping a tally of the reactions I get when I tell people (those not in a science degree) that I have 9 finals. So far it’s been equal between exclaiming “is that legal?!”, speechless jaw dropping, and pity. One of my best friends, who is working on a arts degree, likes to pipe up with:

“I only have one exam this entire year… and I’ve only ever had one midterm in my entire University career…”.

She isn’t allowed to speak to me on that topic in the first couple weeks of December.

Enjoy the last weeks of the semester, everyone!

2 responses to “Stealing from my Uni blog again…”