Up, down, and in between: A competition debrief

The first two competitions of the season have come and gone, and left me realizing that I am out of shape– and have a lot to learn. We’ve made our debut in the jumper ring, and said our farewells to the hunters. We’ve dealt with rain and heat, and been tested by new challenges. I’ve found new muscles, and realized the stark differences between the riding styles required in the different rings. Here’s a run down of the highs and lows over the last two weekends!
My most rewarding day was definitely my first day at Ride of Rides, during Red River Exhibition. This was in the sand ring, and the first day brought gorgeous weather and fun courses. I competed in the .85m (2’9″ft) and the .90m (3ft) jumpers. That day may have been a classic case of beginners luck- I came away with 2nd and 3rd in the .85m open and Junior Amateur classes, and another 2nd and 3rd in the .90m classes. Everything seemed to go without a hitch, although I was feeling quite out of shape after round 1 (and 2, 3, 4). Compared to what I’ve been used to (8 jump hunter courses), a 11 jump course that requires a very active riding style, plus a immediate jump off course (additional 7 jumps for speed) felt like a marathon (in all reality it was more like a 500m sprint x 8). The second day of competition brought literally all the rain, making for a sloppy ring. Our first round of the day in the .85 brought a decent course until about jump 9.. where Willard caught the back rail of a wide-ish and stumbled upon landing, causing me to slide off the side into the quicksand below..landing on my back for some nice whiplash effects. The next 15 minutes were spent with the medics, who quickly realized that I wasn’t going to agree to stop competing for the day. I promptly signed the refusal of treatment form and hopped on to go back into my next .85m.. this time I ran a double clear for 3rd place. Warming up for my .90m that day, Mr. Will did exactly the same thing and stumbled me into the biggest puddle in the warm up ring after a oxer. Sigh. This time I landed face first (mid tuck and roll), and fully exfoliated my entire body (without the spa experience). In my own true style, I managed to bruise my ribs and make my rotator cuff very unhappy. Thankfully the medics already knew my name. This stunt caused M to grumble “enough playing in the sand for you today” and scratch me from my .90m.. which I was thankful for. I was also quite thankful that day three of the competition was cancelled due to torrential rain. 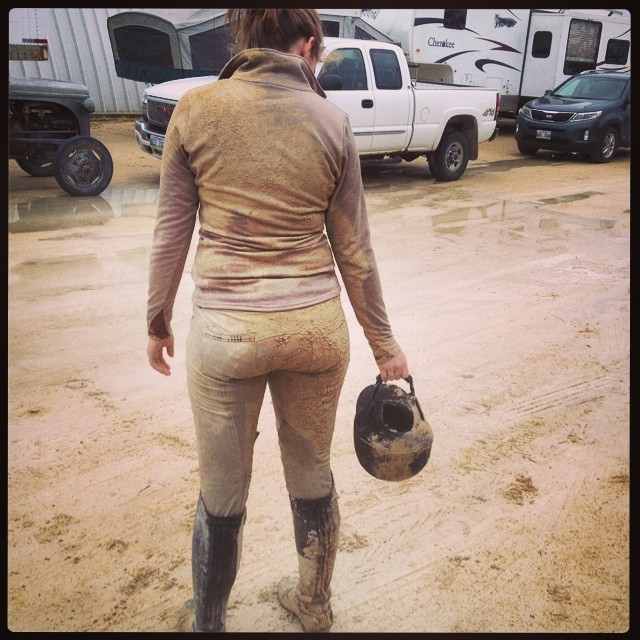 Half recovered and not at all refreshed, we headed into the next competition 4 days later. Warm-ups felt great, minus my complaining ribs and surrounding muscles. This time we competed in just .90m jumpers, and then did the Child/Adult/Non-pro Hunters (3ft) so I could compete in the Hunter Derby. This meant Saturday had 5 courses between rings (2 jumper, 3 hunter). Our jumper rounds were a little sketchy. The combination of me not being horribly effective as a rider, both myself and Will’s confidence still being shaken from the previous weekend, and the courses being much more challenging then we’d experienced before brought some new lessons. The jumper courses on Saturday featured a lovely combination going away from the gate to a long one stride (for Will anyway)– vertical to a wide oxer, and then 4-5 strides to a scary skinny plank jump that featured a pair of wide smiling cartoon lips on it. It was rare to see any horse and rider combo get through this combination with complete grace over the weekend. Our first course was half decent until getting around to this combination. Will got into the one stride okay, but didn’t make the distance to the out oxer with much confidence (mostly my fault) and had to chip and leap to get out- unseating me in the process. I recovered on landing, but not well enough to set him up for the teeth that came up pretty darn quick, resulting in him taking the left side run out. No blame on him for this, my riding instilled absolutely no confidence for him to draw off! We came back to it no problem and completed the course. The second course started out the same way, and this time Will took a great distance into the one stride, but stopped at the out jump.. he really wasn’t giving me any breaks this weekend. Coming back for attempt two,  we added into the one stride and got through the rest of the course okay.
Our hunter rounds that day started out equally as sketchy. This is where the stark differences in riding style became very obvious to me. Both of us forgot how to ride a hunter course, and with this lines being built pretty long (again) we were presented wth a challenge. Our first course came with adding to each line. Which was okay, as I really wasn’t trying to compete in this division- I was just required to enter it if I wanted to do the derby. Our handy course in the division was built for us, though. Set to all our strengths, the course involved no set lines, and was full of roll back turns and bending lines. Yay! This was definitely one of the best hunter courses I’ve ridden in my entire career thus far. We both clicked back into the hunter rhythm. I was able to loop the reins, sit into a half-seat and let Will do his thing over the course. We placed 2nd in this course! This definitely made up for our somewhat frustrating jumpers earlier in the day, and reminded me that I can actually ride worth something. The derby started up at the end of the day, and our course was great- except for our unlucky rail at jump #2. For those who are unfamiliar with derby scoring, a rail automatically lowers your score to 40/100. So although we had an excellent round, we were out of luck for placing.. I ended the day with a 56/100 after bonus points for handiness and high point option jumps being added. Through all his grumbling about me doing hunters this weekend, M even gave me a “tough luck, kid” after that round. M’s statement from last year: “you have to be lucky to be good, and good to be lucky” was ringing in my ears after day one at Summer Smiles. 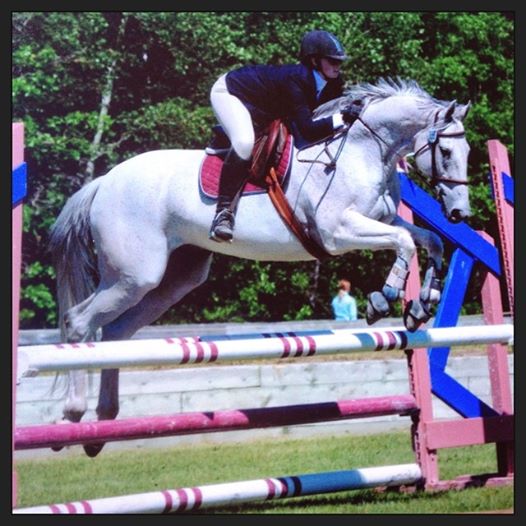 Day two left us with just two jumper courses. Much to my chagrin there was a two stride and a one stride in the day’s courses (some part of my brain was hoping they would omit any challenging combinations from the courses…). We started out with each of us giving each other mixed signals through the first course. Jumps 1-7 went okay, with some unnecessary lazy rails on Will’s part. 8A-B brought a one stride, which Will promptly halted right before, for no apparent reason other then lack of confidence. He came back to it and did it fine with an add (again, felt pretty long). Around to the two stride we got through with an add again, and then looping back to the final line (oxer on the outside rail 7strides to the lovely teeth jump…which was conveniently placed right beside a group of endurance horses tied to trailers). Through sloppy riding on my part, and an uninterested horse, we ran out the left again. Course 1, incomplete. Warming up for round two, in an attempt to wake myself and my horse up (after grumbling a motivational, “c’mon girl get riding!”), M set the warm-up fences a good few inches above course height. So, with me muttering “holy shit, M” under my breath in the strides leading up to the warm-up fence- we kicked ourselves into gear and Will clumsily knocked it over first and then over jumped it the second time (goal accomplished, M). The next class brought a lovely round- actually- with a confident add in the one stride (no point fighting for it at this point!) and a beautiful two stride. Around to that dreaded final line again we went, this time getting in okay but Will was having non of the teeth endurance horse combo, and my legs were apparently non-existent. So we stopped, and I flew off the side. Classy finale, team, classy finale. I, however, have chosen to omit that jump from the course- and as a result am quite pleased with how we finished off. 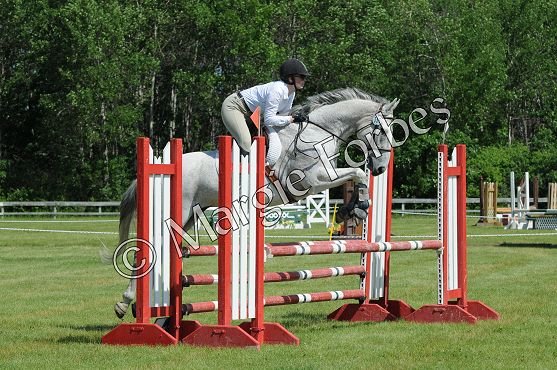 So, as you can probably tell, competition two was a little more challenging then competition one. But competition one was a little more painful and wet then competition two. They both had their ups and downs. The biggest lesson I learned is that it is absolutely impossible to be an effective rider with stiff, bruised ribs on one side. It 100% affects one’s ability to be fluid and therefore confident in the tack. C picked up on that from a field distance away, and commented that I wasn’t riding as well as I could be, and queried as to whether my leg was okay or if I was sore from the previous weekend still. The leg is fine, even though we’ve had some issues with proprioception over the last few weeks– taping is helping with that. The soreness definitely was a factor, and I’m sure I will be going through rider bootcamp in the next two weeks in prep for the next show (Beach Party!). Leading up to both these past competitions, I wasn’t able to be in the tack as much as I wished- which lead to the resultant fatigued horse and rider. We learned how much we still have to learn, but also how much we’ve progressed. M&C are continuously challenging us which is exactly what we asked for this year, and I am loving it- even if it comes with small frustrations along the way!

Like Loading…
← Having it all- but is there time for the cake too? The amateur diaries.
→ Rectus Oculosis- How not to think

3 responses to “Up, down, and in between: A competition debrief”