I jolted awake at 2am,at  5200masl, and noticed I had drooled blood all over my sweater (lululemon took a beating on this trek). Had my lip split? Was I coughing up blood in my sleep? Did I have a pulmonary edema as a result of altitude sickness?

With no other symptoms, my hypochondriac brain was mildly too tired to overreact and frankly well past caring- I let myself drift back off to the oxygen deprived sleep I’d come from. Living in the alternate reality of the Diamox dreams. What was I going to do about it anyway?

The rest of my group trekked to Kalapathar that day, starting at 4:30am. I was too sick and too tired to bother- knowing that the point of the hike was to see a panoramic sunrise view of the Everest range, and it was dead cloudy anyway. By the time they got back around 9am, I had only been awake for an hour, but seen the Everest range from the bathroom window. My body said no, and my mind followed suit. The stories of hallucination from my trekking mates were entertaining, but I was happy I continued hallucinating within my dreams that morning instead! 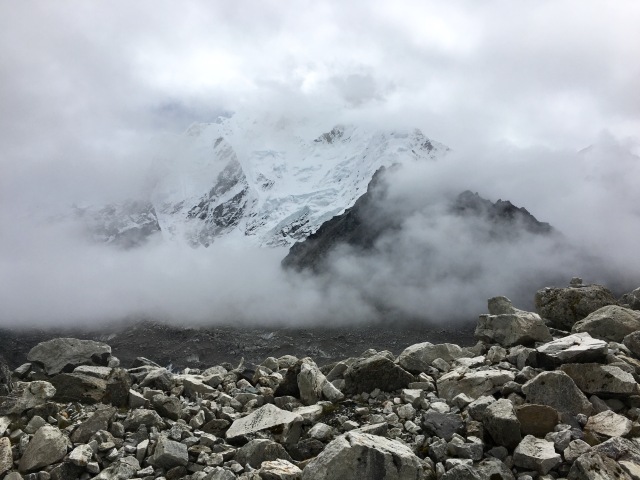 After breakfast that day we began our descent. Our head guide was very anxious to get us down to lower altitudes, as every single one of us was starting to suffer- including himself. I only remember pieces of this day, but I do recall this being where I really started feeling extremes of emotion and pain. Also where I began using the “Om Mani Padme Hum” mantra in my head. Compassion for inner and outer struggles, compassion for the journey- “the jewel within the lotus”, the light in the dark, the blessing from the curse. Moving slowly down from over 5000 back to around 4000 was physically challenging in a whole new way. Descending was always difficult in that it’s hard impact on all your joints- but now, after 10 days of trekking, every joint was a little bit louder. And, descending we were- but that doesn’t mean there weren’t any hills to climb. We stopped briefly in Lombouche for lunch (4500), but most of us had lost all appetite. I think I fell asleep at the table for a while. Then we carried on down to a small tea house a few hours down. I am currently calling this place “Yak House” because A) I can’t remember most of this day, B) I misdated my journal and skipped this day, and C) it was where we saw our first yak on the way up.

We spent the night here, and it was here where we experienced the first bathrooms we refused to use (we being Lisa and I), and instead used one of the many surrounding boulders. I believe it was this day that I began listening to music for the first time while trekking. The first day I did this on the descent I couldn’t stop smiling. This was likely a combination of increased oxygen to my brain and a good playlist.

The next morning we carried on towards Tengboche. The hardest part of this day was the incline up to the monastery which was about 30-45min. Again, more oxygen and music kept me pumping all the way up. Before we joined a worship with the resident monks, we had a few hours off in which we got to each lunch and I TOOK MY FIRST SHOWER IN 7 DAYS!!!!!! Finally, I started to feel human again. I also had my first “steak” here- which was basically ground meat in the shape of a steak.. Regardless.. protein and iron.. two things I was definitely craving.

That afternoon we joined in on a worship in the monastery. Since it was a Saturday, they did a 2hr long meditation. This was very different from any meditation or worship I’ve experienced. Complete with chanting, horns, drums, and silences (usually ended with startling blares from the numerous horns). During the periods I was able to meditate I transitioned between flashbacks to a conflict I’d had a year or so prior to this, moments of pure calmness, and moments of unsettledness. Flashing back to memories of feeling isolated, alone, scared- but also calm. A conflict that had never really been resolved within myself or the other person within it. Then during periods of the loud music I saw colours.. red, yellow flashes. Warm, but chaotic. It was a very cyclical process, and I can’t say that I came out of it feeling peaceful or settled- rather quite the opposite.

We were now sitting at just over 3200masl, a much nicer altitude then what we’d become accustomed to. That night I dreamt I was being circled and chased by a darkness. It was always watching, always waiting to attack- completely out of my control. I woke up periodically shivering, even though it wasn’t cold.

Over the next few days I would learn that I was not the only one to experience that dream at that monastery.

The next morning I woke up with an anger I hadn’t ever experienced. I couldn’t spend any time in the guest house, and as soon as breakfast had ended I took myself outside to pace. I felt suffocated and a deep need to get away from everyone and the monastery. 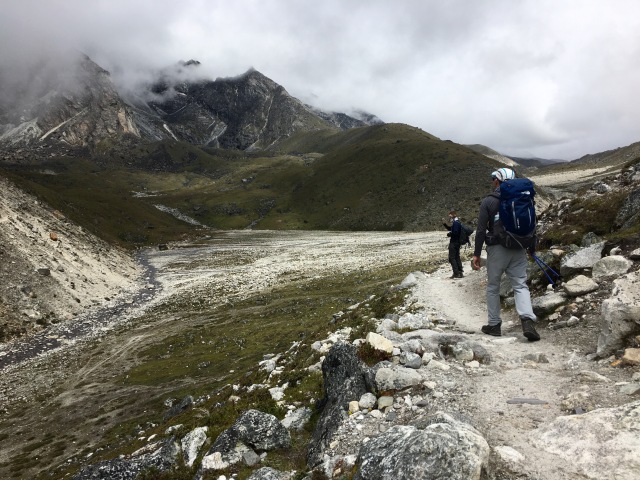 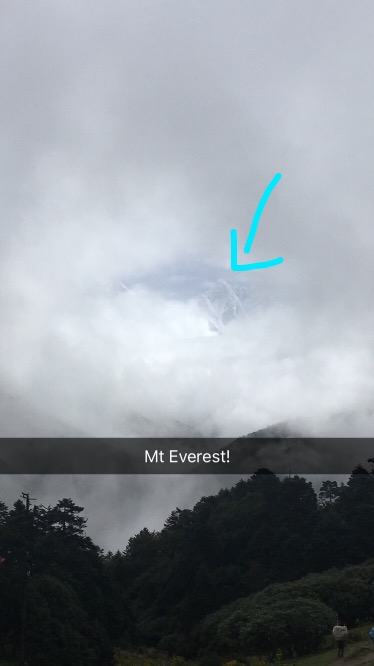 As soon as the group started our descent to Namche that day, I had my ear phones in and didn’t talk to anyone for the next 3 hr trek. As much as some parts of this trek are hazy, the pure rage I felt this day is still clear as day. I don’t know where it came from, but I do understand it was something I probably needed to let go of. Since my return home there’s been some interesting revelations and emotional adjustments that I can only explain with the rage I felt on this day, and the calm I felt after letting it out.

We spent a few hours back in Namche, shopping and what not, before continuing our way down to our final tea house on the long trek. It was here I tried some Nepal home brew- which tasted like watered down Kool-Aid and Antifreeze (really, still confused about that). At this point everyone was a strong mix of unbelievably fatigued, but also so excited to be pretty much done. We had a celebration that night, complete with dancing.

The next day, the last trekking day, we returned to Lukla. This was our first day of constant rain, and our “waterproof” gear failed every test. So did the zippers on my backpack a few days prior. So, completely soaked and entirely empty- we landed at the tea house where we started it all. When my football coaches saw the picture of me below- they stated “holy sh** we’ve never seen you look that exhausted before…”. They knew me in University as an AT student. Everest you win! 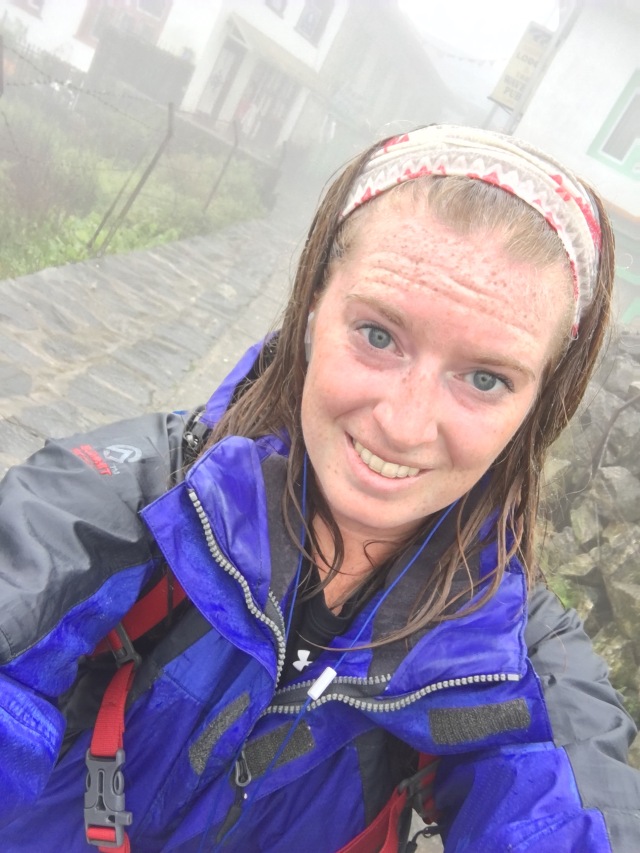 That night Lisa and I taught the Australian in our group, Noah, how to line dance in a shady “Irish Pub” underneath a “Starbucks” in Lukla. The trekking was done, but the adventure was FAR from over!

And so we left Pheriche and headed to Lombouche.

Within 20 min of trekking I was far behind the group.

I woke up with a worsening chest cold. While the views that morning were unbelievably, the air beautifully crisp- I felt like I was walking into quicksand with every step. The first hour or so of today’s short trek were on the flats- through small fresh glacial creeks, and on winding trails full of mountain shrubs and flowers. With the mist above and some sun peaking through. Even on these flats I was struggling to get enough air into my wheezing lungs.

We hiked through the flats, up and across a rushing glacial river (probably the sketchiest crossing yet), and then up and up to Lombouche which sits around 4900m. At about the 4700m mark I began experiencing the throbbing altitude headache many had already experienced on the trek. When I sat down in the lodge in Lombouche and had my vitals taken, my starting O2 levels sat at 56%. Luckily they rose to a comfortable 76% within the hour. That probably explained the headache.

While the rest of the group did a 100m+ acclimatization hike that afternoon, I sat it out and fell asleep with my legs resting up a wall. I had finished the morning’s hike with a very sore chest, very swollen legs (besides the compression socks I was wearing), and numb feet. It was all I could do to stay somewhat lucid at this point. You think you’ve experienced full physical, and mental exhaustion- until you reach this point. Then you find a whole new level.

From Lombouche we continued up to Gorakschep (5180masl). Positive memories at this point are few and far between. I didn’t want to talk to anyone in my group, I came into the village about half hour behind the rest- back to my 5 steps at a time mentality but completely void of emotions. Somewhere around the 5000masl mark while trekking I started crying, and it felt like all emotions and cycling thought processes left me. Poured out of my heart like the glacial rivers we’d been following the whole 10 days. I cried behind my sunglasses as I became empty- and then I cried because I realized how badly I wanted to quit. The scenery, the mountains, THE mountain, the sherpas, the tourists, the monuments- I didn’t want to be in it anymore. I wanted to be done. The diamox dreams filled me with sadness and anger the night before- and I’d woken up sobbing two mornings in a row. Those altitude laden dreams were all related, all lucid, and all too real. They helped me resolve many things, and let go of emotional baggage- but boy could they be harsh. 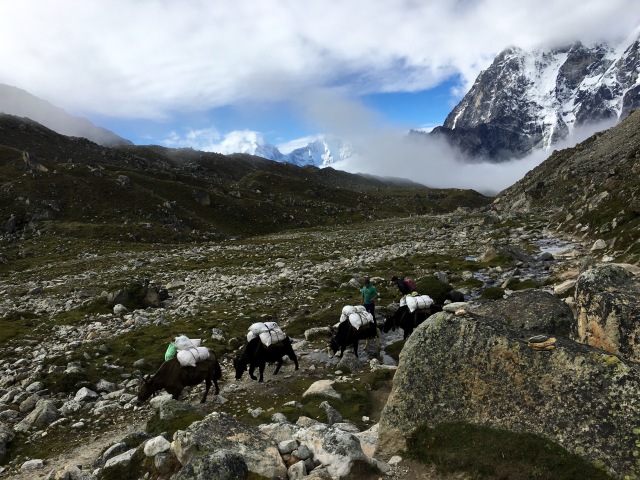 When we arrived at Gorakshep we had a lunch break and then continued to Base Camp. The goal. Before setting off, in our two hour break, I honestly contemplated throwing in the towel. It was 10:30am where I was, and 2am home in MB. I’d been connectionless for about 7 days, and decided to use some cell service to source out some motivation. Texting a few close friends and my mom- hoping someone would bring my mental game back into focus. Thankfully I received one text right away (“HOLY S***- You have to keep going!!!”) from a friend I knew would be awake. And some reverse psychology from my mother (“If you’re sick, you should stop- you can always go back again and finish later”) That was enough to get me going for another few hours (my brain knew enough at this point to know that I didn’t want to have to start this whole journey over again out of principle).

We trudged along towards EBC (5350masl). Over the frozen, sandy lake bed and then over rock trails (literally- the actual trail had been washed out by that year’s monsoon and no longer really existed. In the picture above you can see one of our guides pointing at where we should place our feet on certain rocks. We got to the rocky plain that was base camp- took pictures- and I sat on a large boulder overlooking the glacier for a while. Literally with no thoughts. I just sat. I was empty. I’d made it- but at this point, I didn’t care. I was just happy to be sitting still and breathing. 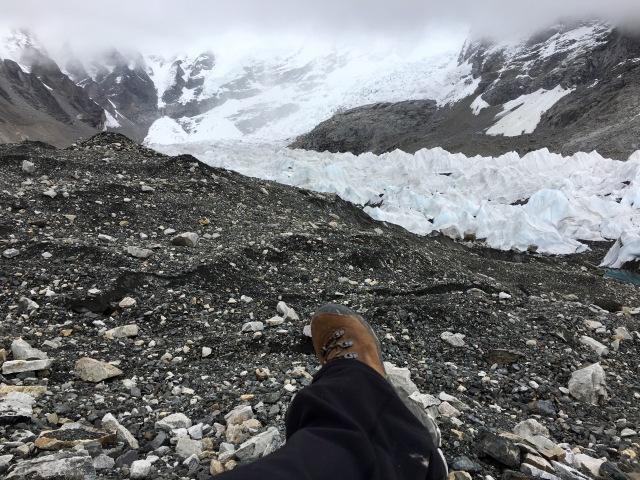 Next post I’ll begin reliving the descent- because believe me, this trek only was starting to get interesting!