I usually do a Top 10 of the year to bring in the New Year, but this year I thought I’d do something a little different. In place of a list, here is a letter written to myself on the past 12 months.

As 2014 comes to an end, you are reliving countless moments from the year past. Most of them good, some of them not so much. 2014 began for you with fate halting you in your tracks (quite literally), with a broken leg and a ambulance ride (this post has more detail). You probably won’t ever forget that night.

The year continued as your leg healed and your eyes were opened to new things and new experiences. 2014 was a busy year for you, in almost all areas. You began work on your own brand with Katmah Training, starting out with a strength and conditioning class for riders- and, now at the end of the year, you find yourself promoting biomechanics and position assessments, booking group clinics for riders on biomechanics, and working on your own research project. Not a bad progression. As spring came and your leg continued to mend- you had to deal with some fear around getting back in the saddle. By refusing to let fear control your season, you pushed through and got yourself through one of the toughest competition seasons of your life which brought true meaning to the saying “sweat, blood and tears”- and even made the transition from hunter land in the the jumper ring (why you chose to do this while recovering from a broken leg and nerve damage is still up for question).. all the while having great support from your teammates and now close friends M and L, your coaches, parents and boyfriend. As the show season ended, and your fear became less- you faced another hurdle when you made the decision to sell your long-time teammate Will (see When you know, you know for more on this). This meant letting go of yet another fear and letting yourself let go of the belief that taking a break from the sport meant giving it up forever, or that it made you any less of an athlete. Again- the support you had from those close to you was outstanding. Without these people- what you did this year probably wouldn’t have been possible. One of 2014’s biggest marks was likely showing you how much you appreciate the people in your life. 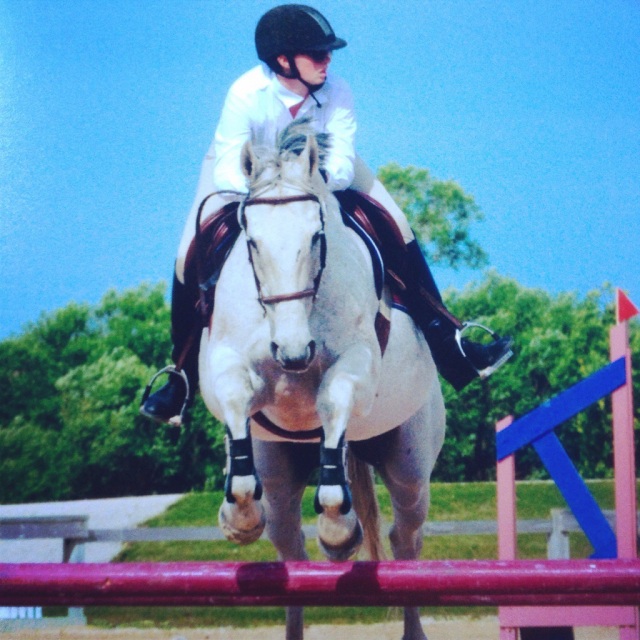 Academically, you faced the most challenging year yet. However, you surprised yourself with your dedication to your studies and the profession of athletic therapy. You realized you’ve found your calling, and you began to see your own potential. You took on a leadership role in your student association, and a few teaching assistant roles. Early in the year you even applied to go to Mayo Clinic in Rochester for their AT-student internship, but fate had it that you were meant to stick around home this year. Instead you began your own research and focused your in class work towards the equestrian sport. In the field you spent the spring covering the MB Winter Games (click here for more on that experience), and football. Summer brought working at the Winnipeg Folk Fest, the Morris Stampede, and then more football, basketball and hockey in the fall. You were the main therapist with your football team this year, and got to see a truck load of injuries. Unfortunate for the kids, but excellent for your confidence levels in the field (this and this are good reads on how your football seasons went. )! You even got published again by CATA with your post Meet Your Athletic Therapist. As an executive of the student association, you were also lucky to attend the first annual Gupta Faculty of Kinesiology and Applied Health Fundraising Gala. This event inspired you and kept you in love with the ever growing profession of kinesiology in Canada. The passion of those involved in it is slowly but surely making it a well-respected part of the health care system.

Other then being swamped by football, you were also working in the clinic(s), manning the student association, teaching, and taking the four final AT courses, and then hockey. While the entire year had it’s ups and downs, the fall took a lot out of you. While the summer made you feel like you were living a double life, being both the athlete and the therapist, the fall flew by until sh** it the fan for about 2 months straight. This is usually how you experience burn out, and you’re finally starting to understand the pattern. First your car got broken into (and all of your ID and medical supplies stolen). Then you got some marks back that demonstrated a clear case of burn out, and your leg began acting up more then necessary. Then your car got towed (you hoped it’d been stolen). Following this, and numerous breakdowns, you headed into final exams while simultaneously facing the end of your first major relationship. Oh, and then your car broke down and completely died. Ya think the universe was sending clear enough message? This post gives a longer summary. Here, again, you got a front seat view of how much support you have within your different circles. M and L, your riding teammates, didn’t just stop being your friends when you left the sport- they stepped up in a big way for you this fall and winter. Your parents were endlessly supportive, as well as all your friends and colleagues at school. Even through closing the chapter on your relationship, J remained a big support and friend for you too.

When you look back at 2014, it’s easy to see that it was a year of learning (as every year is) for you. Learning took place in new areas. You were forced to deal with many emotions and feelings you either hadn’t given time for (love), or had locked away (fear). You proved your ambition within your career, and that is paying off looking into the new year. Before the year ended, your research took off and you began to form your own biomechanics program for riders. While it’s in the early stages, it will come in handy for the few clinics and talks you’ve been booked for early in 2015. It was very much a year of growing pains, in pretty much every aspect of your life- whether it be sport, career, or personal life. After getting through December full of exams and focusing on your research before taking some time off around Christmas, you road-tripped out to Lake Louise with your cousins. You definitely couldn’t afford this excursion- but your head thanks you for it. It was a great way to hit reset and bring in the New Year.

As the clock nears midnight, you’re sitting in the Fairmont Chateau watching rich people in velvet suit jackets get progressively more confident on the dance floor (it’s as entertaining as it sounds). You have a fresh mindset on many things, and are looking forward to 2015 as a exciting year for you. Right now you have plans to work the Scotties tournament, the National Badminton Championships, and are starting in a few new clinics. You will continue with hockey, now with a younger student shadowing you, be a teaching assistant in two new classes, continue your own research, and come spring return to you beloved football team. You are done course work now, with just two humanities left to finish- which means your schedule is much more flexible and coordinated to your AT life. You will return to MORFit, after a month off, continue running your own business, and tutoring. With a little more wisdom when it comes to scheduling (we think) you will get back into the gym and yoga on a regular basis, because you know it’s what you need– that time for you– to stay sane and keep the Universe off your back. Since you aren’t riding competitively anymore, you need to find other ways to keep your body moving and your mind settled. Hopefully you’ll make it to this years CATA conference in Halifax, and surely you’ll find some new adventures to fill your summer with. This will be the first summer without a heavy training and competition schedule to keep you busy- but also the summer before you challenge the national certification exams.  After reflecting on 2014, you’re grateful for all the things it’s shown you- and are welcoming 2015 with a smile!

For future reference- practice gratitude everyday, it’s one of the things that kept you going through the low points of 2014.